As I touched on in my last post, there are some big problems that we as a species need to tackle if we are to stand a chance of leaving a decent world for the future. That can be really daunting, and it can all seem rather hopeless; what is the purpose of tinkering whilst the world burns? Of course I think we should all be pushing governments and companies to make dramatic changes, but we should all be looking at ourselves and what we can do personally.

As I mentioned, you should look at making some big changes, some of which are not at all difficult (e.g. changing electricity supplier), but we can all also look at small changes too, even if just to keep the momentum going. All that is a roundabout way of saying I’m going to talk about a tiny and frivolous personal change, which everyone should do too!

The bathroom seems to be the next household location after the kitchen which contains a lot of single use plastics. The standard bathroom is likely to contain myriad plastic bottles, toothbrushes, toothpaste, razors etc etc. Some of those are super easy to swap, like switching to a solid shampoo bar (my usual is from Lush). One that is perhaps a little more challenging is how to substitute disposable razors/razor blades. The offering on the high street and in supermarkets mainly consists of a variety of plastic pastel-coloured monstrosities with an ever-increasing number of blades. They are also very expensive, considering they will be thrown away after a few uses! Of course an option for the braver among us is to just not shave at all; I certainly partly manage that out of sheer laziness (once a month for the legs in winter!). I do like to keep the armpits tidy though, and legs in check in the summer, so I thought I’d see what else was out there. 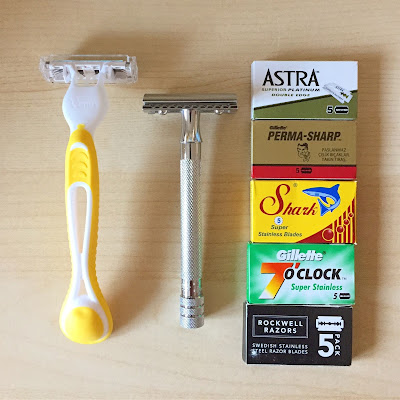 And behold, the double edge safety razor, a perfect plastic-free option! I feel like this is something that has been hidden from us, presumably in the hunt for ever-increasing profits, because after the initial outlay this option is CHEAP. I paid £29 for the metal handle (this one), which should last for years as it is nice solid metal. If anyone wants to go delving around on Ebay there are people selling vintage handles that are 30+ years old, so they are built to last! There are also some seriously slick designer options out there, if you want to spend a bit more. The blades though are really cheap, I bought a mixed pack to try out some different brands, and it works out as 24p per blade, but you can definitely get them cheaper if you buy in bigger packs.

The best bit though is this thing works as well, if not better than, the plastic modern version. I haven't had a single cut or nick and less irritation after. As the blades are stainless steel they should be recyclable, I plan on collecting them in a tin and then taking to the local recycling centre. As I've only used one blade this month (1 x leg shave, 3 x armpits shave), it'll take a while to amass some for recycling!

In conclusion, there is no reason not to switch, I absolutely recommend it! Do you have any easy bathroom substitutes?
Posted by GreenCoffeePot at 19:01